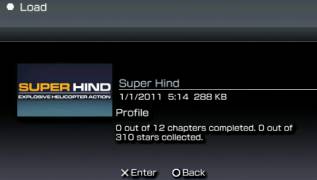 If you have been raided by planes, run over by tanks and ran into foot soldiers, then this game is what you need. Super HIND is another brainchild of Mountain Sheep.

For the first time, a helicopter simulator was released for the PSP. True, no one has canceled the old masterpieces - Jungle Strike, Urban Strike, etc. But PSP is what PSP is for, to show games with graphics that are many times superior to old (even if very good and solid) games.

The new helicopter arcade game will be of interest to many fans of scrolling shooters, as well as those who are just looking for fun and explosions. The game promises to please us with the most diverse geography of locations, high-quality three-dimensional graphics and great customization options for your combat vehicle.