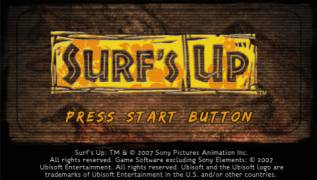 Surf's Up is based on the animated film of the same name about surfer penguins. Developed by the world famous in-house studio Ubisoft Montreal. The game and the film will tell us the story of the penguin Cody Maverick, who goes to the first surfing championship in his life. In fact, this adventure game is also an arcade simulator of this sport. You will visit colorful tropical locations, trying to find the perfect wave, go around dangerous rocks and perform dizzying stunts. Of course, the game will feature all the characters from the cartoon of the same name, among which there will be world surfer stars, Keli Slater and Rob Machado.

“Ubisoft is thrilled to be able to create a fun game based on the upcoming Surf's Up movie. The game will take over from the picture an interesting plot, the intrigue of sports competitions and sparkling humor, - said John Parks, marketing director of Ubisoft. “We are also working closely with Sony Pictures to ensure that the final product is fully in line with the spirit of the film.”