PS1
Ishido - The Way of the Stones 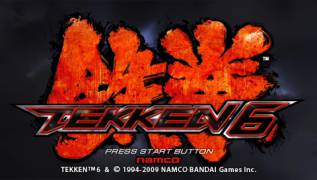 Hook, an uppercut, blow from a turn, a tackle, a jump, blow in a squat & mdash; heroes of Tekken 6 shower with each other a hail of receptions, immediately carrying out tricks from which the head even at skilled acrobats will begin to spin. A new game absorbed in itself all the best that was in a series, and considerably advanced legendary virtual fights, towards to perfection. Inhale deeply, calm pulse, reject all alarms and you come to the arena & mdash; to react to enemy attacks and to strike rapid retaliations, your mind has to be true!

However to look coolly at Tekken 6 it is difficult. From a variety of heroes eyes literally run up! Tekken 6 contains the biggest collection of characters in the history of a series. Besides, you can create the own unique fighter and immortalize his name in nice fights. Open for yourself the amazing world of martial arts!