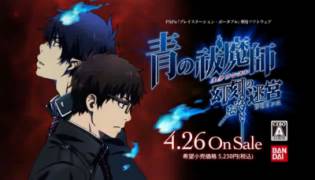 Blue Exorcist: The Phantom Labyrinth of Time is a PSP game published by NAMCO Bandai Games. The game is based on the manga anime Blue Exorcist.

Born from a bond between Satan and a mortal woman, Rin and his brother Yukio have to go through great and dangerous adventures. Join the school for exorcists and strengthen the bond between the brothers. Your ultimate goal is to create a world where humans and demons can coexist together.