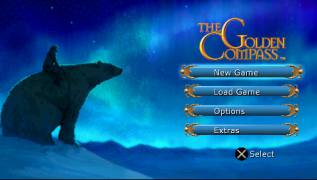 The Amazing Adventures of The Golden Compass is based on the film of the same name by New Line Cinema, best known for the Lord of the Rings trilogy. And the film, in turn, is created based on the novel by F. Pullman "The Dark Materials". An amazing world will open before you, where witches fly in cold clouds, armored bears protect their kingdoms, and villains kidnap children and send them to the icy wastelands. In such an incredible environment, the little girl Lyra has to fulfill her extremely important mission.

Her uncle Lord Asriel has been kidnapped, her best friend Roger has also disappeared, and now she must leave the safety of the college to save them both. During the wanderings, the giant polar bear Iorek joins the girl and her "tame" demon Pan. Together they find a mysterious golden compass - a strange device that indicates the way forward. Epic adventures full of amazing discoveries, dangerous enemies and difficult challenges will lead you to an unpredictable ending that will be remembered for a long time.

Film history. The Golden Compass is an official project based on the upcoming blockbuster from New Line Cinema. An amazing and exciting story, incredible adventures and the atmosphere of real magic reigning on the screen have not only been preserved, but have been further developed in the game.

familiar heroes. The main roles are played by the bright characters of the film: the girl Lyra and the polar bear Iorek. To elude her enemies, the young adventurer uses her cunning and ingenuity, but when a collision cannot be avoided, the invincible Iorek enters the battle.

Fairytale sights. The majestic and grandiose Jordan College, the cramped and bustling city port of Trollesand, and the gloomy research station at Bolvangar will open their doors to you. But the list does not end there - the game expands the geographical boundaries of the film and invites everyone to travel through unknown lands.

The hand demon is your best friend! Cute and funny Peng is ready to help a young traveler in a difficult situation. He masterfully reincarnates into other creatures, which will come in handy more than once when solving puzzles and overcoming obstacles.

Golden Helper. The compass will be the best guide for Lyra and her friends. It is he who will indicate the right direction, suggest the solution to the riddle and help explore the world around him.

Ingenuity matters the most. To get information about dangerous sections of the path and unravel the tangle of mysteries that impede further progress, Lyra will have to take part in a series of exciting mini-games. She can't do it without your help!