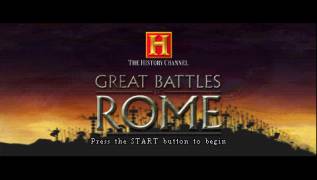 The History Channel: Great Battles of Rome will allow you to take part in several campaigns against the hordes of barbarians besieging the Roman Empire. In total, the game features more than 100 famous battles in 14 campaigns, stretching in time from the creation of Rome to the coronation of Emperor Augustus. You can create a huge army, which will include more than 20 units: a variety of soldiers, legionnaires, archers, cavalry and even heavily armed war elephants, and you can customize each unit at your discretion, thereby creating your own unique army.

The developers carefully recreated various types of environments, including steppes, forests, deserts and coastlines. Battles will take place both day and night. You can choose your own style of gameplay: plan your every move using various tactical tricks, or leave the strategic component to advanced AI, rushing headlong into the center of the battle.

The game also includes 10 Celtic barbarian campaigns and 35 fantasy battles for the Cult of Mithras - exclusive to the PSP version of the game.