NES
Hole In One Special 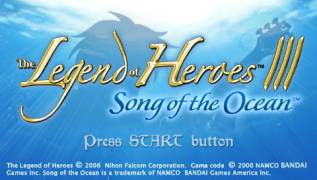 The Legend of Heroes III: Song of the Ocean
PlayStation Portable - PSP

Song of the Ocean is the third installment in the console RPG The Legend of Heroes, and it comes from Japan, of course. According to the laws of the genre, this RPG is filled with turn-based battles and characters with disproportionately large heads. The hair color of the main characters, of course, is reminiscent of some kind of gathering of ravers. The monsters are behaving somewhat strangely. They do not appear "out of nowhere", but walk around the map in the player's field of vision. Moreover, strong opponents joyfully rush towards the characters, while weak ones, on the contrary, try to hide somewhere in the far corner. However, the creators of an increasing number of modern console RPGs are abandoning the usual "random fights" (random encounters). On the other hand, the owners of the PlayStation Portable portable console have every reason to enjoy every new role-playing game: