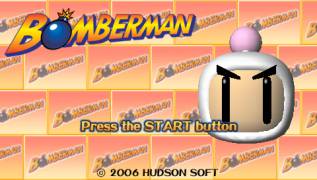 No matter how many tons of explosives the Bomberman has spent, the enemies are itchy. The robot army is once again conquering the planets, turning cities into ruins. An invisible villain with an unwavering hand brings his dirty plan to life. And let the last line of defense fall, let the hero's planet be almost destroyed - Bomberman does not give up! This time the war will go according to a different scenario. A scenario in which the main villain is destined for a sad fate!

Bomberman has been synonymous with true action for many years. Running through intricate labyrinths, hundreds of annoying robots and thousands, thousands of colorful explosions. You will not find such a simple and at the same time rich action anywhere else! And today the same Bomberman returns to the PSP, which conquered the hearts of millions years ago. Fast, loud - explosive! The one he was waiting for! Are you ready to return to the past? Then take a bigger bomb and light the fuse. You have to blow up quickly!

Old sourdough bomberman. The "classic" campaign brings back an old friend. Fifty episodes, colorful graphics and still colorful characters - it seems that the very game-torrento.org first Bomberman appeared only yesterday!
Bomberman of the new generation. The hero appears before us in a new, three-dimensional environment. Dangerous enemies and voluminous graphics - what else do you need for a noisy explosive mess?

Share the bombs equally! Using the PSP's rich wireless capabilities, up to four players can descend into sinister labyrinths. A variety of modes with flexible settings will give you many hours of exciting play.