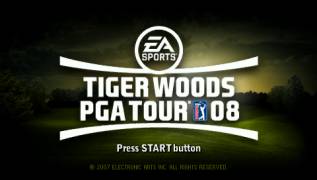 EA representatives are loudly talking about two major innovations in Tiger Woods PGA Tour 08, which will greatly change the usual gameplay. First, we are talking about GamerNet1 - a revolutionary system that is based on interactive game content. The idea is that any player can save their best shots, holes or rounds, and then put them online, giving other players the opportunity to beat their records. In addition, the developers have integrated the Photo Game Face1 system into the game. As the name implies, these are photorealistic faces that players can give their characters by uploading photos to Tiger Woods PGA Tour 08. As you can see in the screenshots, the model of the main character, repeated world champion Tiger Woods, now looks as close to life as possible. Back at E3 2005, Sony showed a very similar model in its PS3 demo. In Tiger Woods PGA TOUR 08 you will find the most famous golf tournaments and competitions in the world. You will be opposed by the best golfers in the world, whom you can easily recognize by their appearance, style of play, and even faces and emotions. The number of tests that you have to overcome, compared with the previous version of the game will double at once!

Game Features:
* Create your own player. With the help of special tools, you can create a virtual copy of yourself. You can change the appearance of the player with a variety of fashionable accessories from various manufacturers.
* Golf has never been so dynamic. Thousands of fans' eyes will constantly follow you, and each shot will be commented on by the best commentators in the world. Events on the field will be studied by David Feherty and Gary McCord. Each step and each hit of the player will be scrupulously and objectively evaluated.
* Not a game, but a TV broadcast. In picture-in-picture mode, you will see not only the general panorama of the field, but also the expression on the face of a virtual player during the shot, tracking the flight of the ball and evaluating the result.
* Every hit counts. A completely new aiming system will make the task more difficult, but with accurate calculations, it will make the strikes more effective and accurate.
* More rivals. You will be challenged by 15 world golf stars including Tiger Woods himself, John Daly, Vijay Singh, Ian Poulter, Michael Campbell and Annika Sorenstam ).
* Get to know golf stars! The revolutionary UCAP technology has made it possible to create player models with incredibly realistic facial expressions, appearance and behavior. For the first time, you'll surprise the player's reaction to a hit - joy, a subdued reaction, or outright disappointment. The appearance of virtual players is so real that you won't believe your eyes!
*A huge number of tournaments. The PGA TOUR features new golf courses and even more competition including Firestone Country Club, Glen Abbey, Princeville, Spyglass Hill, St. Andrews and Bandon Dunes.
*Become the best in the world! Up to three players will be able to take part in competitions for the title of the best golfer in the world at the same time. To find out the question "who is the best" at the disposal of rivals five game modes, including Match Play, Battle Golf, 21, OneBall, and numerous online tournaments.