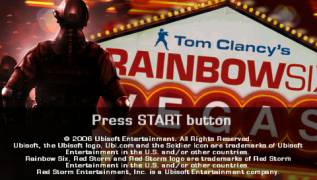 The entertainment capital of America has become a new target for extremists. The terrorist hydra has been hiding its heads behind the glittering signs of the bars and casinos of Las Vegas for a long time, and now it is ready to strike. It is Sin City that will become the first victim of an unprecedented wave of sabotage that will forever change the face of the modern world. When the time to avert disaster is running out, and the minutes are ticking, Rainbow Six operatives take over. The elite special forces are faced with an almost impossible task - to save a multi-million city from complete destruction.

Game features:
- New game - new heroes! The Rainbow Six squad is replenished - manage a unit, each fighter of which is endowed with unique skills;
- Saturated tactical component;
- Full immersion in the gameplay - mission briefings in real time in the midst of street fighting;
- Advanced animation of game characters;
- Artificial intelligence of a new generation;
- New multiplayer features! Create your own unique character for online play.