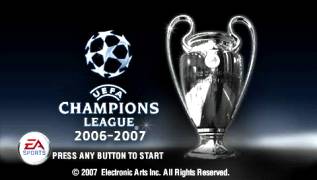 Football Developer: EA Canada Publishing house: Electronic Arts System requirements: The minimum configuration * the Intel Pentium 4 1.4 GHz Processor, or the similar AMD Athlon processor or above * 256 MB of random access memory (512 MB for Windows 2000/XP) * the Video card compatible to the DirectX 9.0c standard, from 64 MB of video memory * 740 MB of an empty seat on the hard drive and the additional space necessary for preservation of games and the DirectX 9.0c installation * the Sound card compatible to DirectX 9.0c edition Type: the license (The tablet is not required) the Interface language: only Russian Description: UEFA Champions League 2006-2007 opens the road to the world of absolute football superiority. Real tables of results of matches and constantly renewed data on the changes happening in league erase borders between the virtual championship and reality. Hundreds of official players, tens of clubs and commands, realistic graphics and new control system & mdash; in UEFA Champions League 2006-2007 there is everything that is so appreciated by fans of virtual soccer!

of Feature of a game: Football duel. In the The Treble mode each match & mdash; a call which to refuse you not in the right. Keep the team to a victory, win awards and points and do not forget about time. Fight is conducted only one season. Hidden opportunities. To open and play a game in all its variety, you should show the remarkable will to win. Win matches and score points. Only winners will be able to exchange them for new players, stadiums and different types of a covering. Convenient management. To intercept a ball in air, to beat off angular or to reflect the strongest shoot for goal enough one pressing of a key. Football bad weather. The championship of Europe passes under any environment. Even if snow in the field dropped out, flew clouds and sharply also mdash became cold; the match all the same will be held. This game will kindle any ice!