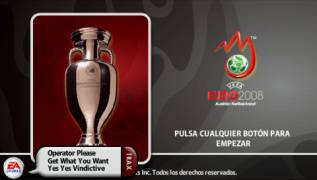 The European Football Championship is an incredibly exciting spectacle. Fans are waiting for the grand tournament as a holiday, because this is a time of white-hot passions, a time of victories and disappointments! And now it's also time to play. With UEFA EURO 2008 you have the chance to lead any of the 52 national teams to victory. The championship, taking place in Austria and Switzerland, unfolds with your direct participation. Now you can not only cheer for the favorite, but shoulder to shoulder with him to overcome all the stages - from qualifying to the final. The coveted cup is already very close!

But the road to triumph will not be easy: only the best of the best are represented at the European Championship, the rivals fight like angry wolves! And even the weather brings unexpected surprises, because rain or fog can significantly affect the outcome of the match. You will have to take into account all the nuances to get to the coveted reward. The national team is waiting for you, so show everyone what it means to be a real captain!

Your pass to the champions. You can win the European Football Championship and lead one of the 52 teams to victory.

Become a real captain. Three people can play with you at the same time for the same team. The unique qualities of each and the ability to coordinate actions - this is the way to victory! But at the same time, you must fight with each other for the title of captain. Eight statuses separate a beginner from the right to be called a leader: work on yourself, and the fate of the team will be in your hands!

Jump into the game! Your character is easily transformed into your exact copy: put your own name on the form, and then use the points earned to make a real champion out of a football player.

Grand Tournament. Represent your country in the world league to win the right to be called the best. The individual and team points you earn in tournaments will help you build the football club of your dreams. Do you think your team is the best? Now you can prove it!

Penalty as an art. Taking penalties is a whole science. Test your skills and strength of nerves - the drama of the situation is reproduced to the smallest detail!

Dance of joy. Every goal scored is an occasion for genuine joy. By controlling the player, you will be able to demonstrate your emotions to the stands with gestures and “turn on” the crowd.

The weather is unpredictable. Capricious European weather is recreated with all accuracy. Unexpected heavy rain turns the field into a muddy puddle and it becomes more difficult to play. Winning in a downpour is aerobatics.

Unique strategy. Each team has its own strategy. You will never know for sure what type of game your opponents will choose, whether at home or away. It remains to rely on your own instinct and extensive knowledge.

No managers anywhere. Managers are an important link in the management of the club. Now you can watch how their mood changes depending on your game. One has only to concede a goal, as the people on the bench will lose heart, but the victory will instantly inspire them.

Just like in life. The use of EA Sports Soccer Engine graphics technologies has opened up new possibilities for developers in creating artificial intelligence. The goalkeeper reacts to events just like a living person, he is able to pull out a hopeless ball and miss a goal that is insultingly simple. After all, people make mistakes!

From qualification to victory. Each club starts its way to the coveted cup with qualification, and then moves to the main European award. At the same time, the captain of the national team needs to perform individual and team tasks.
Leadership race. The regularly updated rating of the best players is based on the same evaluation principles that apply in real football. Winning first place will not be easy.