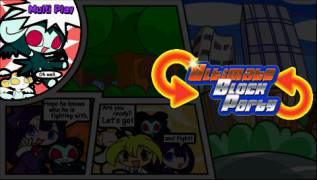 Based on the arcade game, your goal in the ultimate block game is to eliminate blocks from the board by grouping like colors together. You can rotate groups of four blocks left and right. Lining up to four pieces of the same color makes the pieces disappear from the board. As the four pieces disappear, you can continue to connect more pieces into groups, adding to the growing chain of annihilation pieces. You can add an extra line with the quick button (this is an advanced method for those who don't have enough parts to make a combo), although lines are added automatically over time. If your block stack hits the top of the screen, you lose!

This game was released as Kollon in Japan for the psp launch. Later for the American edition, the anime-style game was improved with a wireless game for 2 players (by the manufacturer's artdink, from the original MagicPot Japanese/Korean version.) Also has 8 characters, as well as against the CPU, campaign and training modes.