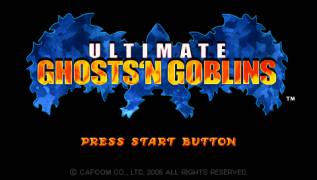 In the Ultimate Ghosts 'n Goblins game, the brave knight Arthur will once again have to draw his sword, because evil cannot remain idle for a long time, and who can solve all the problems of the state, if not our hero? For a long time, Arthur believed that his battle with the representatives of the underworld was over forever, and the gates between the worlds were closed. However, time passed, and the dark lord showed his face again, having freed himself from centuries of imprisonment and kidnapped the princess. The hero will have to go to the sinister forest to save the princess from death and send the devil and his servants home. The main innovation was the change of the graphics engine to a fully three-dimensional one, which made it possible to better depict the characters and the environment. Arthur has acquired new skills - now he can perform powerful blows, double jump, shoot in several directions, grab the ledges and so on. The game will offer an exciting story that will tell the story of Arthur throughout all 5 levels, at the end of each of which a boss will be waiting for him.