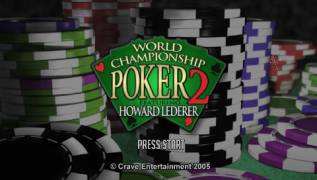 If you like poker, then now you had a fine chance to play one of final games of the international championship on this remarkable game. A game will provide to you to play an own way through a series of games to World Poker Championship 2 where you will be able to take part in ten international casinos and to earn the highest places in the rating of the strongest. to you it to be presented by

to p an opportunity surpass the twenty of one of the titled players in poker on the planet, and each of which has own unique style of a game and the equipment. It will be hard to climb a tournament ladder, but also you will get a prize not from small. In a game the charged atmosphere of a competition is worked carefully out, and characters possess very animation. Virtual opponents are able to bluff skillfully, and from time to time can even swindle.

in general if you decided after all to begin to play in poker for money, then than the training grant, than World Championship Poker 2 is better: You will not find Featuring Howard Lederer.