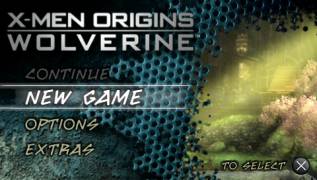 Thanks to comics, movies and games, the mutant X-Men are known to many. But what can you say about each of them? Recall a nickname, characterize unique abilities - that's probably all. X-Men Origins: Wolverine offers a unique opportunity to get up close and personal with one of the team's most colorful fighters, Wolverine.

The game is based on the film of the same name, which sheds light on the hero's past. The virtual action movie X-Men Origins: Wolverine partially repeats the events of the picture, but also goes beyond its scope. You will learn how and why Wolverine was created, who tried to control him and how the fighter gained freedom, as well as discover other dark and frightening secrets of his past. However, the path to truth will not be easy. To survive in battles with numerous opponents, Wolverine will need all his abilities - remarkable agility, impressive strength and sharp claws.

Hurricane Fighter.
Wolverine's life is an ongoing struggle. You have to cope alone with entire detachments of attackers, fight at a ten-kilometer height, jump through the rotating blades of a helicopter and perform many more tricks that are inaccessible to mere mortals.

Over a hundred tricks.
Wolverine has mastered the art of close combat using adamantite claws. It cuts, pierces and cuts through enemies without giving them the slightest chance. In addition, the hero jumps superbly - a lightning throw is used to attack opponents who are not approaching the strike distance.

Invincible warrior.
Wolverine's wounds and fractures heal before our very eyes. The inhuman resistance of his body to damage and the amazing speed of regeneration allow the hero to act risky and extreme.

Get furious!
In this state, the character opens up new tricks and combinations of blows that turn him into a perfect killing machine.

Animal instinct.
To find a weak point in the enemy, gain a tactical advantage and solve the puzzle that has arisen along the way, Wolverine uses his animal instincts.