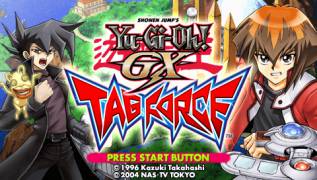 Do you know how to play cards? Not in the "fool" and not even in poker, but in other cards. When they lie on the table, empires are born and entire worlds die, angels and demons converge in a deadly battle, magic collides with technology. Each move in such a game is a powerful spell, and delay means the death of the hero. If you are unfamiliar with such cards, the Duel Academy will certainly teach the beginner all the tricks of the art of Yu-Gi-Oh!.

Start training right now and get ready for the biggest challenge of your life! Yu Gi Oh! GX Tag Force is the first game in the series to be released on PSP! A new academic year has begun at the Duel Academy, and the organizers of the competition have prepared a surprise for the students. From now on, it is allowed to take a partner into battle, whose help can turn the tide of the most hopeless duel. The team that plays the best and wins the tournament will receive a unique prize - a trip to Duel Academy Island! Is this not the best reward for the strongest?