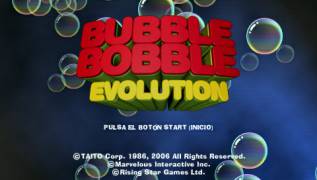 Bubble Bobble Evolution - continuation of the classical game Bubble Bobble. The gameplay of an original game was considerably expanded due to emergence of interesting innovations: the mode for beginners, new types of bubbles, obstacles and enemies appeared in a game.

the Most important innovation was the fact that the structure of levels was completely changed. As before, you will need to finish with thousands of bubbles and to win against hundreds of monsters, but now puzzles will appear in a game, for example, to finish level, you will have to find a way to warm an ice barrier by means of fire or to water grains and to wait until the bridge grows from plants.

& laquo; We wanted to introduce something new in the game Bubble Bobble besides transfer of a game in a three-dimensional environment. Having used all power of PSP, we managed to develop as much as possible the original concept of Bubble Bobble, - the producer of a game, Tony Byus told. - It is not usual Bubble Bobble to which all got used. It is absolutely new game which will become evolution of Bubble Bobble and will bring a lot of pleasure as to fans of a classical game, and those who was not a sign with