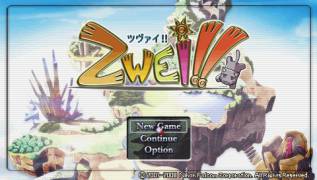 Granvallen is a mysterious world of floating continents where magic once flourished. Everything changed a thousand years ago when humans and demons fought in the Great Witchcraft War. The war was instigated by six demon lords who opposed the two goddesses Aplyes and Espina and attacked the world of Granvallen. After a lapse of five hundred years, the curtains of strife are closed when the Tiara of the priestess of the princess of the Kingdom of God "Valence", and the heroic Saradis of the crusader Demon defeated Lord Vesper in the floating continent of Arshes. The Granvallen suffered many losses and the magical civilization was disappearing.

Five hundred years after the devastating battle, the world of Granvallen bailiffs in the era of peace and those who can wield magic is a rare sight. Pipiro and Pokkle are two children, both 14 years old, who live in the village of Shaiba, located on a remote island in the Arshes continent. One day, they notice a mysterious masked man enter the village's temple and decide to follow him. The man has stolen six statues of the goddess, the treasure of the village, with Pipiro and Pokkle unable to stop him. The couple decide to leave the village to get the statues for their own reasons and hence their journey begins.

The game is reminiscent of Dungeon crawlers, but includes more emphasis on RPG elements and puzzles. Players control two characters, Pipiro and Pokkle, and can switch between them at any time. Pipiro fires magic at enemies while Pokkle fights with a drill-like weapon. Both characters can use elemental attacks to target enemy weak spots, with Pipiro's spell also granting access to new dungeon areas. Scoring multiple hits on enemies increases the chance of dropping trophies and earns combo badges, allowing players to launch combo attacks that damage the entire screen.

Players start their adventures at Puck Village where they can chat with NPC characters to get clues to progress in their adventure. Just outside the village is Pikachu from Arshes where dungeons and other locations can be accessed. Dungeons are divided into several stages, with each stage having three floors. Many stages can be completed in different orders, although each stage offers a hint slab outside that shows the recommended level to check it out. At the end of each dungeon is a powerful dungeon boss who guards one of the statues of the goddess.

Instead of defeating enemies to level up as in most RPGs, experience points are gained through the consumption of food items that are dropped by monsters and obtained through other methods. Ten of the same product can be combined, in a Village Paca restaurant, to create a higher food item that awards more experience than individual items. At the beginning, the player can get a pet, ranging from various types of cats and dogs, which will follow the protagonists, helping to collect items dropped by opponents. Turning in the pet tag also unlocks the highest combo attack tier.

In addition to the main game, there are a number of special items that serve as table accessories and can work during the main game. The first accessory, obtained in automatic mode, is the "Home Monitor", the main adventure game that stars the pet from the main game. Users can choose from two options at different intervals, which can result in pet levels rising or rewards in the base game. By default, the game randomly makes choices and can progress without user influence. Other accessories include a calendar, clock, calculator, "mona mona" puzzle and typing tutor "typing with games". In the shooting game called "Zwei!! Shooting" you can also familiarize yourself with the most basic game. A5200
Transformers: The Game