The Super Nintendo Entertainment System (also known as the Super Nintendo , Super NES , and SNES ) is a 16-bit game console released by Nintendo in the United States, Brazil, Europe, and Australia. In Japan, it is known as Super Famicom, short for Super Family Computer, or SFC. In South Korea, it was called Super Comboy and distributed by Hyundai Electronics. While all console versions listed are the same, regional locking makes it impossible for cartridges from different countries to be compatible.

The Super Nintendo Entertainment System became Nintendo's second home console, following the NES (which was released in Japan as the Famicom). The SNES featured improved graphics and sound capabilities compared to other consoles of the time. In addition, the development of additional chips that were built into the game cartridge allowed it to remain competitive in the global market even after the release of the next generation of game consoles.

The console gained popularity in many countries, becoming the best-selling 16-bit console despite fierce competition in North America from Sega. The SNES remained popular in the 32-bit era with fans, collectors, and emulation enthusiasts (who create homemade ROM images) despite the console being discontinued by Nintendo.

When the original NES/Famicom was at the height of its popularity, other companies were developing their own game consoles. In 1987 and 1988, respectively, NEC and Sega released their consoles: the PC Engine (known as the TurboGrafx-16 in the US ) and the Mega Drive/Genesis . Both systems were built using the 16-bit architecture, providing improved graphics and sound over the 8-bit NES . And yet it continued to dominate the gaming market for several more years, until Sega 's creation finally hit its stride. Originally Nintendo managementshowed no interest in developing a new system, but reconsidered its position when the NES began to become obsolete. Its popularity in the market began to decline, and Nintendo was forced to create a new 16-bit console in order to successfully compete with other companies.

49.1 million SNES consoles were sold worldwide, of which 23.35 million - in America, 17.17 million - in Japan. While the Super NES failed to replicate the success of its predecessor's NES (61.91 million sold worldwide), it was the best-selling video game console of its day. Mega Drive/Genesis was in second place with about 30 million consoles sold worldwide.

The SNES is often ranked among the best gaming consoles of all time. In 2007, GameTrailers named the Super NES the second best console among ten other consoles that have "left their mark on video game history". Outstanding graphics, sound, and many high-quality games were praised. Computer technology columnist Don Reisinger, in a January 2008 article, called the SNES "the greatest console of all time", noting the quality of the games and the significant superiority of the console over its predecessors. Another reviewer, Will Greenwald, also mentioned the NES and PlayStation in addition to the SNES. GamingExcellence websiteawarded the Super NES the first place in 2008, calling it "the most ageless console ever made", and noting the games that have stood the test of time, the game's storyline and controller design, and the console's graphical capabilities. At the same time, GameDaily awarded the console 5 out of 10 for the console's graphics, sound effects, controller, and games. In 2009, IGN ranked the Super Nintendo Entertainment System as the fourth best video game console, praising its sound effects and "lots of high quality games".

The Super Nintendo Entertainment System , designed by Masayuki Uemura, creator of the Famicom , was released in Japan on November 21, 1990 and retailed for ¥25,000 ($210). The game console was an instant success, with Nintendo 's first shipment of 300,000 sold out in a matter of hours, and the ensuing social unrest forced the Japanese government to ask game console manufacturers to schedule releases over the weekend. The appearance of the new prefix also attracted the attention of the yakuza; as a result, it was decided to deliver the goods at night in order to avoid robbery.

In Japan, the Super Famicom began to quickly edge out its main competitor, the Mega Drive ; thus, Nintendo again became the market leader in video game consoles. This is partly because the company has been able to maintain partnerships with most third-party developers such as Capcom , Konami , Tecmo , Square Co., Ltd. , Koei and Enix , who previously made games for the Famicom .

"However, one of Nintendo 's biggest strengths was the game that came with the Super NES console , Super Mario World ."

Nine months later, on August 23, 1991, Nintendo released the Super Famicom in the US. The case was redesigned for the American market, and the system itself was named the Super Nintendo Entertainment System . Selling for $199, the North American bundle included Super Mario World . The SNES was released in England and Ireland in April 1992 for £150, followed by a German release a few weeks later. Consoles sold in countries in the PAL region looked identical to the Japanese Super Famicom variant , except for the label on the tray and the length of the gamepad wire. NES and SNESwere sold in Brazil in 1993 by Playtronic , a joint venture between Estrela and Gradiente . In Russia, the prefix appeared in November 1994 and at the time of going on sale cost 420,000 non-denominated rubles ($135). The console was distributed by Steepler , which also sold the Dendy.

When the Super NES went on sale, only a handful of games were made for it, but they were highly acclaimed by players. Initially, only Super Mario World and F-Zero were available in Japan . In North America and Europe, the Nintendo Super Mario World game was already shipped with the console ; in addition, in addition to F-Zero , Nintendo games such as Pilotwings (which demonstrated Mode 7 , the pseudo-3D rendering capability of the SNES ), SimCity , and Gradius III were on sale .

Games The SNES has powerful 16-bit CPU, graphics, and audio co-processors, unlike other consoles of the time, which had some 8-bit numbers; it is possible to use "Mode 7" - a mode with which the effect of perspective is achieved. These qualities allowed the set-top box to be competitive for a long time. Some game cartridges have additional chips inserted. 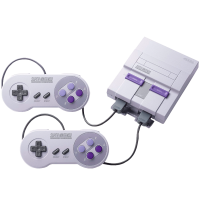 The kernel has an 8-bit data bus controlled by two address buses. The 24-bit "Bus A" is used for general accesses, and the 8-bit "Bus B" is used to support the chip's registers. Normally only one bus is used, but the built-in direct data access (DMA) module can send reads on one bus and writes on the other, reaching a transfer rate of 2.68 MB/s. CPU - Designed specifically for the Nintendo Ricoh 5A22, based on a 16-bit WDC 65816 CPU. The CPU provides variable bus data rates, depending on the memory area accessed in each cycle: the input clock is divided by 6, 8 or 12 for the bus clock. For cycles in which registers are accessed, shared or not accessed, the frequency is divided by 6.

The DMA module contains 8 independent channels, each of which can operate in two modes. The main module transmits up to 64 KB per cycle, and the horizontal sync pulse - from 1 to 4 bytes at the end of each scanning video line. HDMA is commonly used to change video settings to achieve effects such as perspective, split screen, and non-square window without using the CPU.

The 5A22 also contains an 8-bit parallel I/O port (which was largely unused on the SNES); controller port interface circuits allowing parallel and serial access to controller data. In addition to it, there is a 16-bit multiplication and division module; a circuit for generating non-maskable interrupts on the VBI, as well as IRQs at pre-calculated screen positions.

The SNES cartridge is commonly referred to as the Game Pak in Western countries and the cassette in Japan. While the console itself can address up to 128MB of memory, only 117.75MB is available for the cartridge. Normal mapping can address up to 95MB of ROM data with 8MB of RAM. However, most memory access controllers support mapping up to 32 MB. The largest games ( Tales of Phantasia and Star Ocean ) fit on a 48 Mb cartridge, while the smallest games require only 2 Mb.

Cartridges may also contain a separate block with SRAM and a battery for saving game data, additional RAM, coprocessors and other hardware.

Also on the Internet you can find many resources to download SNES games for Super Nintendo, you can play them on emulators that are provided on many platforms.

The standard Super Nintendo SNES game controller has four more buttons than the NES equivalent. On the front of the gamepad, the buttons are located in the shape of a diamond, and two more additional buttons are placed on the sides on the back. This controller design was conceived due to the growing popularity of Street Fighter games. The four main buttons on controllers for set-top boxes sold in Japan and PAL countries are colored in the colors of the SNES logo (blue, yellow, green, red) and have a protruding shape; in the North American version, they are painted lavender and purple to match the color of the console, and their surface is convex. Several subsequent consoles, notably the PlayStation, Dreamcast, Xbox, and Wii (Classic Controller), had controller designs similar to those of the SNES.

Many peripherals have been released to expand the functionality of the SNES. Many of them were similar to those for the NES. For example, the Super Scope, a light gun similar to the NES Zapper (but wireless), or the Super Advantage, an arcade-style joystick with adjustable turbo button speed, similar to the NES Advantage. Nintendo also released a mouse for the SNES along with the game Mario Paint . Hudson Soft, under license from Nintendo, has released the Super Multitap, a multiplayer adapter used in Hudson's popular Bomberman series . Other, more unusual controllers include, for example, the ASCII Stick L5 for one hand, the BatterUP baseball bat, and the TeeV Golf golf club.

Although Nintendo never released an adapter that allowed NES games to run on the SNES, the Super Game Boy was created, an adapter that made it possible to play Game Boy games on the console. The company aggressively advertised this development, emphasizing the advantages over the regular Game Boy: color support (it replaced the usual palette of four shades of gray with some set of colors, but games remained within this four-color palette) and graphic design for an unused area of ​​​​the screen (game image took up only part of the screen due to the Game Boy's low resolution). In Japan, the Super Game Boy 2 was also released, which added a port for connecting a second adapter, allowing for multiplayer.

Classic Controller for Wii, made in Super Famicom style

For the SNES, as for the NES, a number of unlicensed third-party peripherals have been released, such as a new version of Game Genie's codebreaker designed for use with SNES games, and various game copying devices. In general, Nintendo has shown more tolerance towards such developments for the SNES than during the NES days.

Around 1993, Nintendo was hit by software piracy with the introduction of game copy devices such as the Super Wildcard, Super Pro Fighter Q, and Game Doctor. These devices were designed to create backup copies of the cartridges in case they could fail. But most people used them to play copies of games downloaded from BBS and the Internet, or to make copies of rented games. All such actions were illegal.

During the life of the SNES, Nintendo tried to contract with Sony and Philips to create a CD-ROM drive for the console to compete successfully with the Sega Mega-CD. However, negotiations fell through, and Sony began developing its own PlayStation console based on joint developments with Nintendo (some sources claim that Sony subsequently merged with Sega and created the PlayStation using joint developments). Philips also won the rights to release a series of CD-i games based on the popular Nintendo game series. Top games ranked by the Internet - according to the placement, who is number one, alas ... Decide for yourself ...